How to be a troll 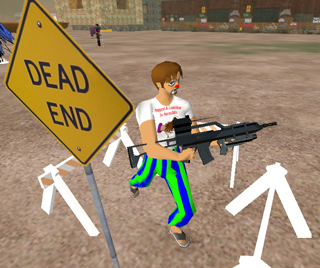 In this blog’s first post, Griefers in Second Life, I defined a griefer like this: “While most of us come to Second Life to “play the game” the way it’s supposed to be played, some residents derive pleasure from bothering others, interrupting the flow of the game, and causing annoyance. These residents are generally called “griefers” because they cause grief for other residents.” Before the existence of Second Life, and even before the existence of the World Wide Web, computer users communicated by using discussion forums or Usenet newsgroups. Griefers in those areas were called “trolls,” defined by Wikipedia as “someone who posts inflammatory, extraneous, or off-topic messages in an online community, such as a forum, chat room, or blog, with the primary intent of provoking readers into an emotional response or of otherwise disrupting normal on-topic discussion.”

You’ve probably been affected by griefers in Second Life, and if you post messages on discussion forums or blogs, you’ve probably watched the trolls at play. And you may have spent countless hours responding to troll posts (like a certain blog author who shall remain nameless), and wondered how and why they do what they do. Well, as of now, you can stop wondering. On the TechCrunch website, James Altucher posted a great article yesterday, in which a very intelligent discussion forum troll describes his methods and motivations, while trolling a forum user named Admiralbill. Here’s an excerpt:

I spent quite a bit of time baiting Admiralbill.  I think it was more than five years before I was banned from the website.  By the time that happened I wanted to be banned.  I needed to end the endless cycle.  It drained my energy.  I was constantly thinking of new ways to piss Admiralbill off.

The statement about wanting to be banned stirs up echoes of something a griefer told me a long time ago. The mentality and the methods seem to be somewhat similar. So if you have been trolled on discussion forums and would like to see how the trolls operate, check out the article. Their secrets are revealed.

Diary of a 5,000-Hours-Per-Year Internet Troll

https://thegreenlanterns.wordpress.com/
View all posts by Hal Jordan →
Gallery | This entry was posted in Griefers. Bookmark the permalink.

4 Responses to How to be a troll